Directive 2018/822/EU (also known as DAC6) was adopted on the 25th of May 2018, which amends Directive 2011/16/EU for the 6th time, as regards the administrative cooperation between Member States in the field of taxation and tax transparency in an effort on the part of the EU to promote tax transparency and deter aggressive tax-planning practices.

The objective of the Directive is to provide tax authorities with a "warning system" regarding potentially aggressive tax-planning systems by introducing the obligation of intermediaries such as consultants (in some cases taxpayers themselves) to notify certain cross-border tax-planning arrangements to the tax authorities. Such intermediaries are first of all required to notify information to tax authorities concerning any cross-border transaction in which they have been involved in some way, provided that such transaction presents certain specific hallmark characteristics. The said authority will then communicate this information to other relevant EU tax authorities through the automatic exchange of information.

The preamble of the Directive outlines the importance of the Directive, how it evolved historically and the need to include new initiatives in the field of tax transparency and the need for Member States to protect their national tax bases from erosion through improved structures and regulations for the reduction of the total tax contribution of taxpayers which implies a significant reduction of the tax revenues of Member States, which prevents them from implementing tax policies conducive to the development of tax policies but also for the purposes of avoiding money laundering.

Who is an “intermediary”?

“intermediary” is considered to be any person (this includes a variety of consultants and service providers), having regard to all relevant facts and circumstances and based on available information and the relevant expertise and understanding required to provide such services, knows or could be reasonably expected to know that they have undertaken to provide, directly or by means of other persons, aid, assistance or advice with respect to designing, marketing, organising making available for implementation or managing the implementation of a reportable cross-border arrangement potentially linked to aggressive tax planning, within the EU.

In order to fall within the category of an intermediary, a person must also meet at least one of the following conditions:

Who is a “relevant taxpayer”?

Characteristics of “Arrangements” and “Hallmarks”

The “arrangements” which have to be notified must be cross-border arrangements, namely, between at least two Members States or a Member State and a third country where at least one of the following conditions is met:

(a) not all of the participants in the arrangement are resident for tax purposes in the same jurisdiction,

(b) one or more of the participants in the arrangement is simultaneously resident for tax purposes in more than one jurisdiction,

(d) one or more of the participants in the arrangement carries on an activity in another jurisdiction without being resident for tax purposes or creating a permanent establishment situated in that jurisdiction,

(e) such arrangement has a possible impact on the automatic exchange of information or the identification of beneficial ownership.

It is noted that an arrangement may comprise more than one step or part.

Furthermore, arrangements are reportable only if they present the hallmarks listed in Annex IV of the Directive, which are considered to be an indication of a potential risk of tax avoidance. For some of these hallmarks, in order for there to be an obligation to notify, it should also be established that the main benefit or one of the main benefits is the obtaining of a tax advantage.

The intermediary has an obligation to communicate these arrangements to the competent tax authority within 30 days which will subsequently communicate such arrangements every quarter though the automatic exchange of information. It will also notify relevant information such as the names of the relevant taxpayers and other intermediaries to the competent authorities of all the other Member States.

Apart from intermediaries, persons who provided assistance also have an obligation to report if, based on all evidence and their expertise, they knew or could reasonably expected to know that they had undertaken to provide assistance or advice with respect to such arrangements.

Where there is no intermediary or the intermediary is established outside the EU or is exempt due to professional secrecy, the obligation lies directly with the relevant taxpayer.

Each Member State has an obligation to take the necessary measures to require intermediaries to file information that is within their knowledge, possession or control on reportable cross-border arrangements with the competent tax authorities within 30 days beginning:

(a) on the day after the reportable cross-border arrangement is made available for implementation, or

(b) on the day after the reportable cross-border arrangement is ready for implementation, or

(c) when the first step in the implementation of the reportable cross-border arrangement has been made, 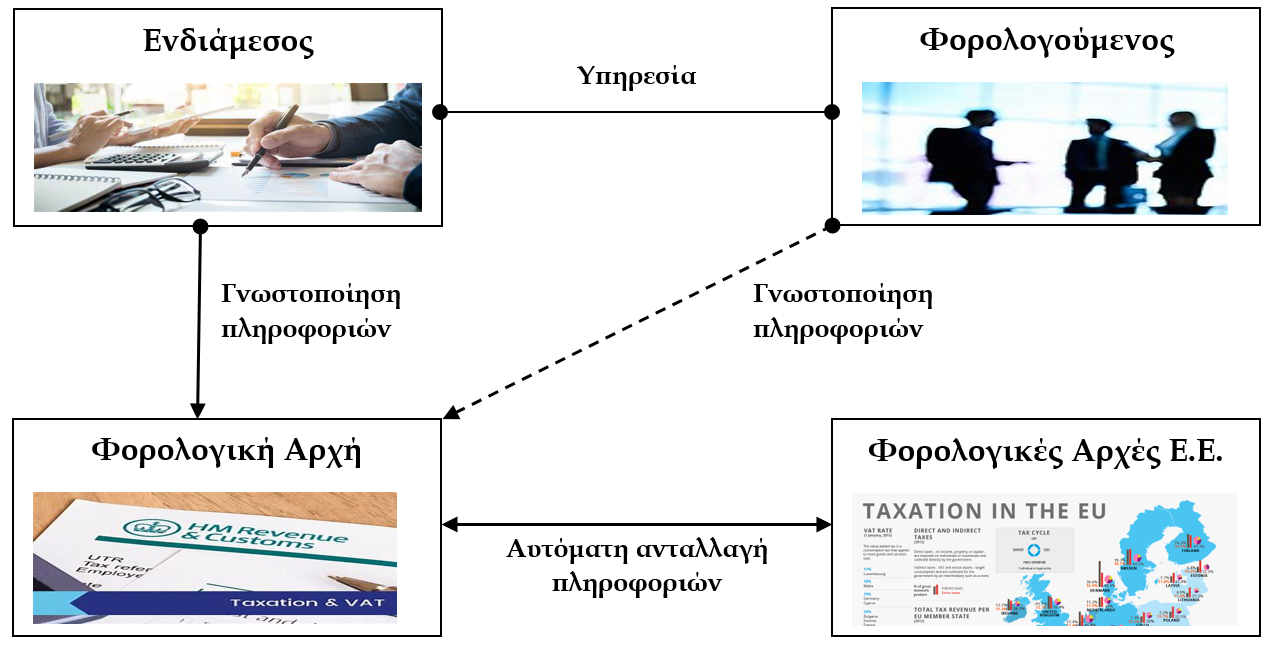 The information to be communicated include the identification of the parties involved (such as for instance, the name, the tax identification number, the tax residence), and, where appropriate, the persons that are associated enterprises to the relevant taxpayer, details of the reportable cross-border arrangement, its value, as well as the hallmarks that make the cross-border arrangement reportable.

The automatic exchange of information shall take place within one month of the end of the quarter in which the information was filed. The first information shall be communicated by 31 October 2020, and failure to comply will result in heavy sanctions.

Which taxes and transactions are covered by the Directive?

The hallmarks foreseen by the Directive are so generally formulated that they may cover a wide range of transactions. In fact, for some hallmarks, the existence of a tax incentive for the transaction is not even considered.

Each Member State must take the necessary measures to give intermediaries the right to a waiver from filing information on a reportable cross-border arrangement where the reporting obligation would breach the legal professional privilege under the national law of that Member State. In such circumstances, each Member State shall take the necessary measures to require intermediaries to notify, without delay, any other intermediary or, if there is no such intermediary, the relevant taxpayer of their reporting obligations under the Directive.

It is clarified that intermediaries may only be entitled to a waiver due to breach of privilege to the extent that they operate within the limits of the relevant national laws that define their professions.

Implementation of the legal framework in Cyprus

In Cyprus a bill of law has been prepared which is ready to be voted on which deals with the provisions for the implementation of the 6th Directive in Cyprus and provides for changes to the relevant legislation and regulations for the purpose of incorporating the Directive.

The bill of law appears to adopt the provisions of the directive to a great extent with regard to the reporting obligation, the characteristics of the arrangements and the hallmarks. It provides, inter alia, a. that in case of non-compliance with the Directive, fines up to €20,000 will be imposed, b. for an exemption due to legal professional privilege, c. the exclusion of the obligation of the intermediary from filing information even in case of incorrect information that does not make the arrangement reportable.

The Directive was going to enter into force from 1 July 2020 with retroactive effect from 25 June 2018, but on the 08/05/2020 the EU published the postponement of the deadlines for the exchange of information for a period of 3 months because of the pandemic.

Even though the purpose of the Directive is to provide Member States with information on potentially aggressive cross-border tax-planning arrangements, the way in which it was drawn up may include ordinary transactions without any particular tax incentive. In addition, it is necessary to give due importance to the enactment of legislation so that it can be applicable on the one hand and on the other hand does not violate the fundamental rights of the persons whose privacy and the protection of their personal data is affected.

Even though the Directive’s usefulness was widely questioned due to its complexity and strict requirements and despite the criticism that it has received, it appears that it has "come to stay" (as previously seen in other aggressive legislation such as the CRS). Thus, when discussing the bill of law, the necessary attention should be given so that the legislation will serve its purpose on the one hand and will ensure the rights of all parties involved on the other. In any event, however, given the short period of time for complying with the new obligation to make a declaration, taxpayers and intermediaries should immediately start preparing taking also into account its retroactive effect.

Article published to In Business, on June 2020, by our Managing Partner Panikos Symeou.